You know who you are.

Because of you, this is my desk.

My desk looks like one of those “count how many puppies are in the picture” that we give children to teach them to count noses. In case you’re not up for it, let me help you:

In case you haven’t counted, that’s three computers, three iPhones, two printers, two microphones, one camera, one iPad and a small stack of devices that accessorize the main devices. And here’s the kicker: out of everything on that desk, the only thing that the MacBook is compatible with it the 3-in-1 printer.

My search engine tells the story: 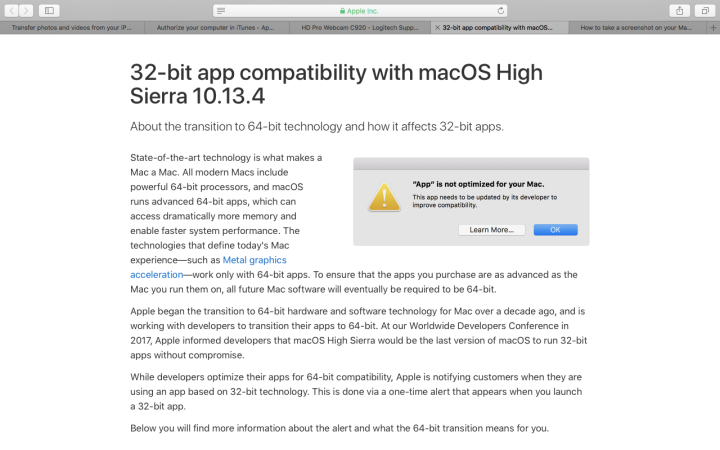 This was me trying to figure out why my webcam, you know, the one with great reviews and that works seamlessly on my non-Mac computers, can’t do more than sit there and stare accusingly at me when I plug it into my Mac. There were similar searches when I plugged in my Blue Yeti mic, my lavalier mic (I couldn’t plug it in at all), and so much for “plug and play” when it comes to switching over the monitor and label printer.

And in case you missed it, I had to google how to take a screen shot AND how to transfer photos off my phone and onto my Mac.

You people – and you know who you are – waxed so enthusiastic about your superior Mac, I got sucked into its sleek design and managed to completely and willfully ignore that even if I could get all of my awesome devices to be compatible, it was unlikely I could use more than one at a time because its sleek design only comes with two USB ports. In other words: assuming I can get my label printer to print, I’ll have to unplug my external keyboard and external mouse to make it work.

And just as a kick in the pants, I can’t even listen to podcasts on my Mac because – get this – after I authorized everything else to work on iTunes, I maxed out my authorizations.

But the lies stop here. They stop today.

To anyone who has cruised into this post: if you have not yet bought a MacBook, don’t do it. It’s compatible with nothing. It can’t be made compatible. Assuming you have accessories, they will not be compatible. You will end up begging on street corners hoping to get enough money to buy the proprietary converter thingy that will turn one device at a time into a downgraded “where’s that high-pitched whine coming from” version of what used to work just fine back when you just owned a single Windows laptop.

To my friends who convinced me to buy this device that is best used for Facebook and Netflix in bed (thus freeing up my iPad so I can read other blog posts), I assume you have shares in Apple. My sadness for knowing how low you have stooped is second only to the vengeful wrath I feel every time I have to lug my MacBook around in my purse so I can look like I fit in every time I go to Starbucks.

2 thoughts on “Oh the lies I have believed”